Hidden deep in the mountains of Colorado lies the Inn at Havenfall, a sanctuary that connects ancient worlds–each with their own magic–together. For generations, the inn has protected all who seek refuge within its walls, and any who disrupt the peace can never return.

For Maddie Morrow, summers at the inn are more than a chance to experience this magic first-hand. Havenfall is an escape from reality, where her mother sits on death row accused of murdering Maddie’s brother. It’s where Maddie fell in love with handsome Fiorden soldier Brekken. And it’s where one day she hopes to inherit the role of Innkeeper from her beloved uncle.

But this summer, the impossible happens–a dead body is found, shattering everything the inn stands for. With Brekken missing, her uncle gravely injured, and a dangerous creature on the loose, Maddie suddenly finds herself responsible for the safety of everyone in Havenfall. She’ll do anything to uncover the truth, even if it means working together with an alluring new staffer Taya, who seems to know more than she’s letting on. As dark secrets are revealed about the inn itself, one thing becomes clear to Maddie–no one can be trusted, and no one is safe…

Huge thanks to Bloomsbury for sending me a proof of Havenfall!

After reading Sara’s debut, Everless, and instantly falling in love with it, I knew I needed to get hold of Havenfall ASAP as soon as it came on my radar, and I was so happy to receive one of the gorgeous proofs from Bloomsbury! This was a story that sucked me straight in and kept me intrigued long after I finished it.

The Inn at Havenfall houses the gateways to other worlds, and every summer Maddie goes to the Inn to work with her uncle, the current Innkeeper, intent on becoming his successor once he retires. The aim of the innkeeper is to be the neutral host as the delegates from other worlds meet at the inn to discuss all things business and politics between their worlds. I felt as though this was both a really interesting premise and point of view for it, as we were going in to the world from the perspective of someone who knew and loved it, rather than someone who was a stranger to it (as books like this are often told). You could really feel Maddie’s love for Havenfall and her desire to become the Innkeeper on page.

Essentially, Havenfall is a book full of mystery, even starting off with one as the main character Maddie meets a mysterious stranger on her way back to the inn at Havenfall. This trail of mysteries definitely kept me hooked as Maddie uncovered more and more about the world she loved and thought she knew. Although some aspects of this were solved in the book, it definitely asked more questions than it answered and has really built itself up for further world building as well as character development in the sequel.

Maddie’s character was realistic in the sense that, although she has these high aspirations to become a mediator of the leaders of other worlds, she’s still a relatable teenager who makes mistakes and often has to go to those more experienced than her for help. Her mother is in prison after being accused of murdering her brother, and I feel as though having a character with this background in a fantasy novel was certainly something I haven’t seen before. I think the fantasy story set in a contemporary world worked really well! 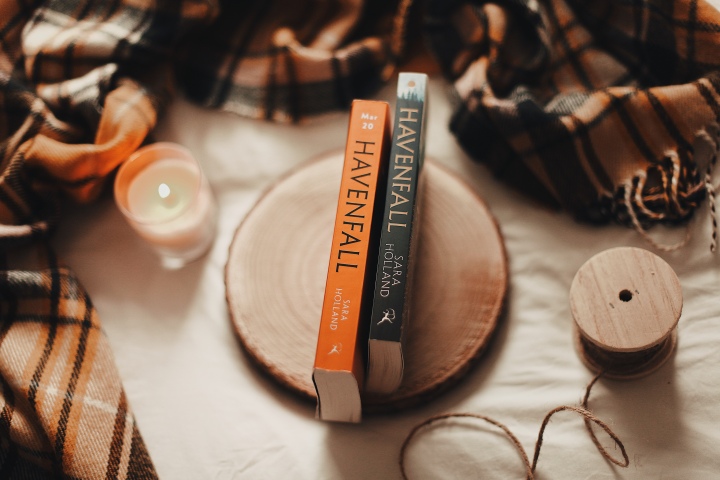 Maddie is confirmed on page as being bisexual, and there was a bit of romance; although Maddie definitely had one prominent love interest, I’m excited to see where the second possible love interest goes next.

I definitely feel as though Havenfall was just the beginning of what’s going to unravel into a great story and I can’t wait to read the sequel – hopefully we’ll get to visit some of the other worlds mentioned in it too!

One thought on “ARC Review // Havenfall by Sara Holland”