Thanks to HarperVoyager for the ARC of this book! This review will be spoiler-free. 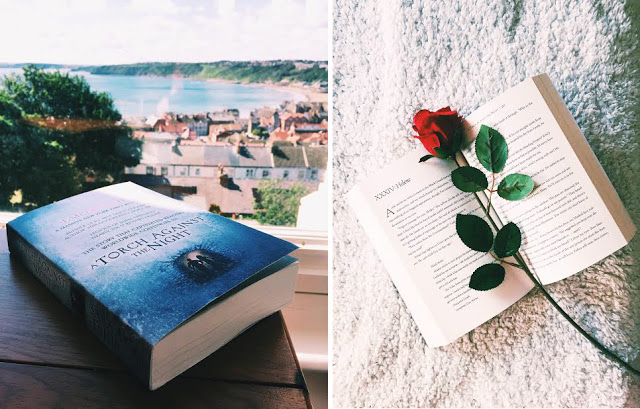 If you survive, you shall be a force to be reckoned with in this world. But first you will be unmade. First, you will be broken.
+
A Torch Against the Night kicks off right where An Ember in the Ashes left off – with Elias and Laia fleeing for their lives, on their way to rescue Laia’s brother from Kauf Prison. In order to reach Kauf in time, they must avoid detection from the Martials and the Commandant – but can they really trust those who they think are on their side?
The Empire has taken an even darker turn under Emperor Marcus, and Helene Aquilla must face his atrocities firsthand with her new role as Blood Shrike. When her loyalty to Marcus is questioned, she is forced to take on a mission in order to keep those she loves most safe – even if this mission destroys her.
+
I think it’s quite easy for the second book in a trilogy to never quite live up to the thrill of the first book, however, A Torch Against the Night is definitely an exception to this. This book was just as amazing as, if not better than, An Ember in the Ashes. Once again, it was action packed from the start and there wasn’t a slow moment. I was worried that it would have a lot of filler material, and although a lot of the plot was definitely building up to something bigger coming which I assume will appear in the third book, everything was still relevant to this book’s storyline, and I definitely didn’t expect one of the big twists at the end.
As with the first book, Torch was written from one point of view; however, I feel as though where Ember was very much Laia’s story, Torch focuses a lot more on the stories of Helene and Elias. I have always loved Helene, but after this book, she’s definitely my favourite character from this series. All of the characters grew so much in this book, but I think Helene did most of all – and she certainly made me cry more than once.

I’d probably say that the one disappointing thing about this book was that the Commandant didn’t appear much. In the first book, I found her to be such a strong presence, and she’s definitely one of my favourite antagonists. I mean, when she did appear in Torch, she lived up to her reputation and was crueler than ever, but I think she definitely could have been around more. I’m hoping she’ll be a bigger character in the final book of the series!

Despite this, I’d still give A Torch Against the Night a strong five stars. Bring on book three!

A Torch Against the Night is released in the UK on the 8th September 2016 and in the US on the 30th August 2016. Are you excited to find out what happens after An Ember in the Ashes? Let us know in the comments!