“I am going to keep on defying you. I am going to shame you with my defiance. You remind me that I am a mere mortal and you are a prince of Faerie. Well, let me remind you that means you have much to lose and I have nothing. You may win in the end, you may ensorcell me and hurt me and humiliate me, but I will make sure you lose everything I can take from you on the way down. I promise you this” —I throw his own words back at him—“this is the least of what I can do.”

END_OF_DOCUMENT_TOKEN_TO_BE_REPLACED

“You are like a living rose amongst wax flowers. We may last forever, but you bloom brighter and smell sweeter, and draw blood with your thorns.”

I’ve been really excited for An Enchantment of Ravens for a long time, so when I managed to get an ARC in a twitter trade (thanks again, Kelly!) I was over the moon! This book pulled me right out of my reading slump and is literally the perfect autumnal read.

An Enchantment of Ravens follows Isobel, a portrait artist living in the town of Whimsy, whose citizens mostly serve faeries through their ‘craft’. Isobel is a master of her craft, and is renowned both throughout Whimsy and the faerie courts. However, when Rook, a prince of the autumn court, commissions Isobel to paint him, she makes one deadly mistake – Isobel sees mortal sorrow in Rooks eyes and adds this detail to his painting, a weakness which could cost him his reputation and his crown. Rook then sets off to take Isobel to the autumn court to stand trial for her mistake, but the path through the faerie courts is a dangerous one for mortals to tread. 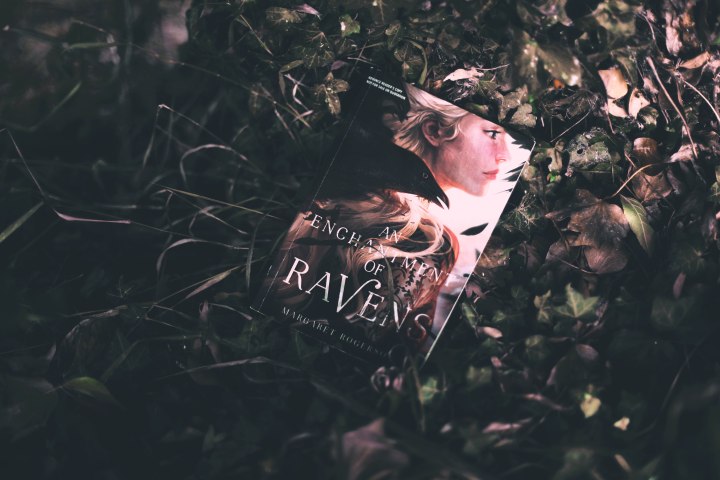 So first off, I have to say – I definitely thought I was over faerie books, at least, YA faerie books. An Enchantment of Ravens, however, is unlike any other faerie book I’ve ever read. Although it incorporates all of the usual faerie-lore, such as an aversion to iron, being unable to lie etc, it still managed to be so unique. The faeries of Isobel’s world are unable to create anything seen as human craft (which ranges from painting to cooking, and everything in between) and therefore, they crave it – hence Isobel’s high end clients of the faerie world. I’ve always been a fond artist, and so I loved that Isobel was a painter, and the details of her painting style, method, and even her favoured oil paint colours really are what made this book stand out to me. You really could tell that Margaret Rogerson had done her research when it came to Isobel’s art, as literally no detail from the pigments to the creation of each oil painting was missed out. The descriptions throughout were vivid and beautiful, and I found it incredibly easy to picture Isobel, Rook, and their journey from Whimsy through to the Autumn court.

I’m not generally a fan of journey books, however, this managed to be a journey book without feeling too much like one for me to get tired of the theme. The majority of the journey focused on character and relationship development, rather than jumping from one path-blocker to the next, and again, this really made the overall story for me.

If I had to give one slight criticism, it’s that I think An Enchantment of Ravens certainly could have benefited from being a bit longer. I believe it’s just about 300 pages long, and I definitely could have read about Isobel and her story for another 200 pages or more! I connected with her as a main character instantly – besides immediately clicking with her love of art, Isobel was a smart, down to earth protagonist, and you all know how much I love strong female characters. The writing was also absolutely beautiful – I cannot stress enough how much each sentence within this book was just perfectly crafted. Unfortunately, I believe that this book is a standalone, however I can say with confidence that I’ll immediately pick up anything else that Margaret Rogerson writes.

An Enchantment of Ravens is out today and I’d highly recommend that you add it to your autumn TBR!

I’ve been a huge fan of Laini Taylor ever since reading Daughter of Smoke and Bone all those years ago, so Strange the Dreamer was such a highly anticipated read for me. I’m so happy to say that it didn’t disappoint.
I’ve taken my time writing this review but, for those of you who haven’t read this book yet, I’ll be avoiding spoilers throughout this post!
+ 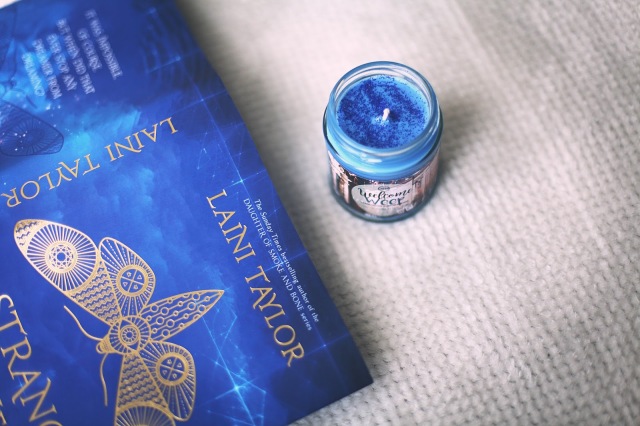 So, as always, Laini’s writing was absolutely magical; Strange the Dreamer truly felt like a fairytale, and I could almost taste and sense the beautiful descriptions being weaved throughout this story. I didn’t think it was possible, but I think Laini’s writing has improved so much since DOSAB – despite that being such a beautifully written trilogy, she’s somehow managed to grow within her writing and surpass it.
Although the story is fairly slow paced, the world building and character development means that this isn’t an issue in any way. I have to admit that Lazlo Strange is definitely one of my fictional crushes now – the gentle giant trope, his love of books, and just the general fact that overall, he is a dreamer – he was a perfect main character, and that’s coming from someone who often struggles to read novels with male main characters. Besides Lazlo, I adored all of the characters, and immediately fell in love with Sarai and her story. The way in which each characters path intertwines to connect each thread of the story together worked in the most perfect way, and although there weren’t necessarily any huge plot twists or surprises in my opinion, Strange the Dreamer had such a wonderfully woven plot and left me craving the sequel.
Without giving away too much, I also loved how easily Strange the Dreamer could be linked to the world of DOSAB, in terms of its mythical and magical aspects, especially within the world building (although I’m not sure if this was purposeful). irregardless, I enjoyed forming the connections between the two stories. 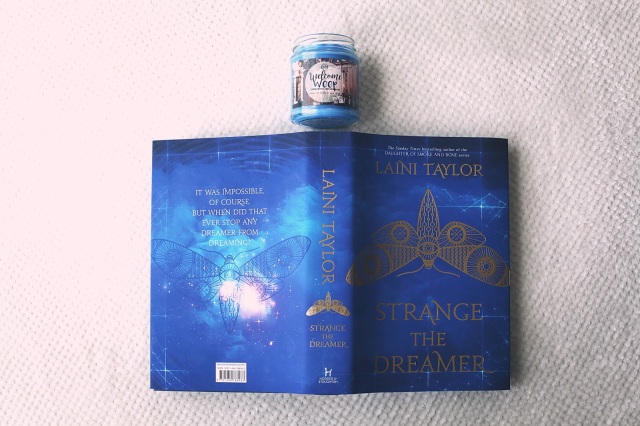 Overall, Strange the Dreamer is a story of gods and monsters, of an orphaned librarian and a half-human girl with dreams that they can’t escape, of lost cities and lost histories, of long-standing prejudices spanning centuries, and of a dreamer who just wants to be the hero of the story, despite believing that he has no skill to ever achieve that goal. It brings together a strong social commentary on how grudges can be held against a group of people based purely on the actions of their predecessors and a simple overarching message to never give up your dream. If, deep down, you have a storytellers mind and a dreamer’s soul, this is the book for you.
love Becky @

Imagine, and it shall be.
There are no limits.

In an alternate Imperialist Russia of 1825, the Tsar has been surrounded by threats from all sides. Facing the Ottoman Empire and the Kazakhs, he decides to begin the Crown’s Game – a fight to the death between Russia’s two enchanters, with the winner receiving the title of Imperial Enchanter, as well as their life.
Enchanter One, Nikolai, has grown up in Saint Petersburg and is best friends with the Tsarevich, Pasha. He has ultimate control over mechanical objects. Enchanter Two, Vika, can manipulate and control the elements around her. When both Pasha and Nikolai find themselves falling for Vika, they both have decisions to make – can Pasha go against his Father’s and his country’s expectations by courting a mysterious girl who isn’t royalty? Can Nikolai save her life, only to condemn his own?
+
3.5/5 stars.
Lately, all that I’ve been in the mood for is books that are set in Russia or inspired by Russian culture, so needless to say, The Crown’s Game was perfect for me in that aspect. I loved the setting – I’ve read a few novels set in Russia recently, but none from this time period. It was really interesting to see the beginnings of rebellion hinted at throughout the novel after Russia’s victory over Napoleon, and the Tsar failing to live up to his promises of equality to the common people. In the authors note, Evelyn Skye mentions that she has studied Russian culture and Slavic languages for years, and you can really tell – she pays attention to all of the little details, and I could easily picture the historical based world that she was building.
I also liked the characters – Vika’s character was really interesting and I’m hoping to learn more of her back story in The Crown’s Heir. I loved Pasha – he was so feisty and adventurous, and I couldn’t help but be drawn to him. Nikolai was definitely my least favourite of the trio, and I do think that I would have connected with him a lot more if his story had been built on and he wasn’t so melancholy when it came to Vika; he often chastised Pasha for barely knowing her yet claiming to love her, yet he had had even less interactions with her and was claiming the exact same thing.
Since the blurb of the book makes it clear that there will be a love triangle, I was expecting it, and it definitely wasn’t the worst love triangle I’ve ever seen (hello, Twilight). However, it was more of a love-square or something – Pasha and Nikolai are both after Vika, and a servant girl is also madly in love with Nikolai. I didn’t care much for either of Nikolai’s possible relationships, and if I had to pick a ship, it would definitely be Pasha and Vika who I’d want to end up together.
Anyway, less on love, more on magic. This book truly was enchanting, and I loved watching the way that the competition played out between Vika and Nikolai. I loved how the magic was infused into what I assume to be average daily life in Saint Petersburg in 1825, and the way that the city was used in the magic.
I was very surprised by the ending, but not in a bad way at all. I couldn’t say much about it without giving away the entire plot, but I will say, it is not typical of a YA ending, and I was so happy about that!
So, onto the reasons why I knocked a few stars off my rating.
Firstly, this book was very slow-paced. I’d find myself reading it, wondering when it would start to pick up from the initial slowness that many novels have, and realised I was already over halfway through. The pace didn’t ruin the book for me in any way, I just wasn’t expecting it.
Secondly, the antagonist. I won’t say much about this to avoid spoilers, but I do think there was a missed opportunity here. There’s a character in the book that I thought would definitely end up being after revenge, but then they just didn’t really do anything? That might happen in the sequel, though.
Overall, I really enjoyed The Crown’s Game – it was a lovely debut, with only a couple of small things that I would have liked to have been different, and I’m looking forward to reading the sequel.
+
Have you read The Crown’s Game? Let us know what you thought of it in the comments!
Love,