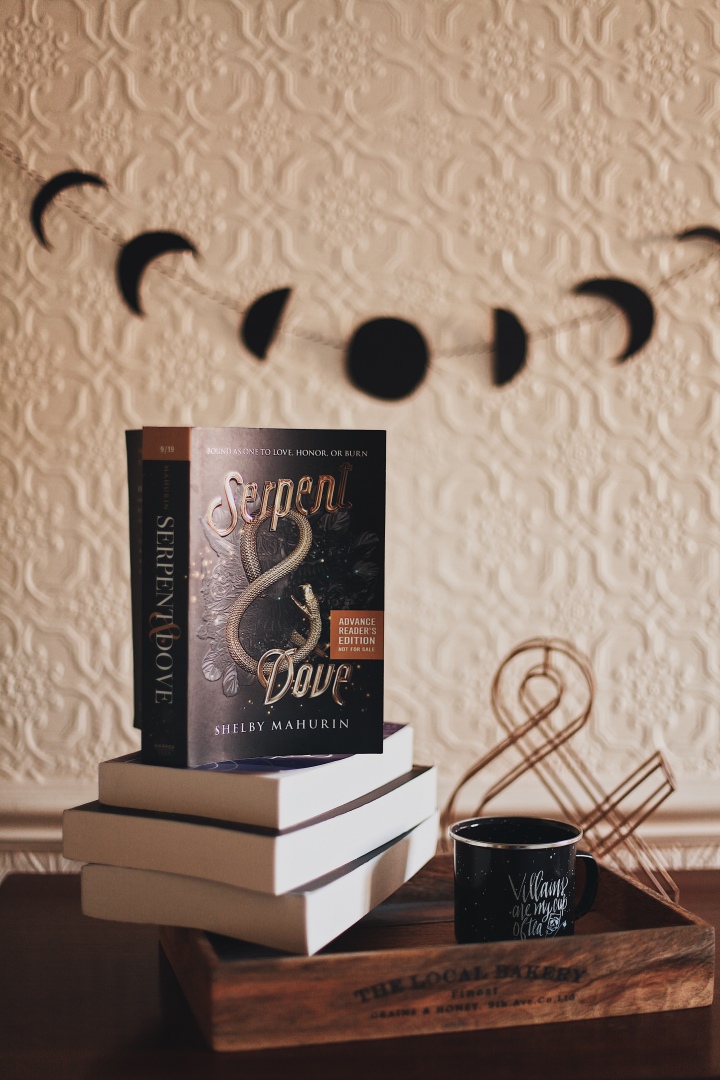 Bound as one to love, honor, or burn.

Two years ago, Louise le Blanc fled her coven and took shelter in the city of Cesarine, forsaking all magic and living off whatever she could steal. There, witches like Lou are hunted. They are feared. And they are burned.

Sworn to the Church as a Chasseur, Reid Diggory has lived his life by one principle: thou shalt not suffer a witch to live. His path was never meant to cross with Lou’s, but a wicked stunt forces them into an impossible union—holy matrimony.

The war between witches and Church is an ancient one, and Lou’s most dangerous enemies bring a fate worse than fire. Unable to ignore her growing feelings, yet powerless to change what she is, a choice must be made.

And love makes fools of us all.

Serpent & Dove has been high on my TBR list for such a long time and I’m so glad it didn’t disappoint!

The book follows Lou, an estranged witch who had to escape from her coven, living in a city that hates witches and is full of Chasseurs – aka witch hunters. After an incident forces her to be married to Reid Diggory, an esteemed Chasseur, Lou has to be more careful to hide her magic from both her new husband and the witches hunting her to fulfil her destiny.

Honestly, this book was just full of witty banter and I loved it. Lou is a sassy, fierce main character and was instantly likeable – she definitely reminded me a bit of early Celaena in Throne of Glass. Although she hides behind her sarcasm and dark humour, she does have a more emotional side which shines through as she opens up more throughout the book. The character development was phenomenal, especially for Reid, who grew so much throughout the book as he learned more from being married to Lou. Naturally, the two start out as hating each other (even without Reid realising that Lou is the very thing he’s sworn to destroy) and it’s just the most perfect enemies to lovers relationship. We also have Ansel, a Chasseur in training who ends up watching Lou for Reid whilst he’s busy on missions, and Coco, a blood witch who’s been close to Lou since she fled to the city. Both of these characters were such great secondary characters, and again had such good development! I really did care about what happened to all of them which is definitely something I look for in a book.

The majority of the plot outside of the characters immediate lives focuses on the war between witches and the church, with neither side being portrayed as fully good or bad. Lou obviously recognises the atrocities that the church has committed against her people, but also sees the ways in which her coven acts that she disagrees with. I’m definitely looking forward to how this divide is dealt with in the sequel as I’m sure we’ve not seen the end of the conflict yet.

My only slight issues would be that I felt as though the magic system could’ve been explained a bit better – it’s made clear that the magic Lou uses is directly linked to her body and exacts a price each time she uses it, however I struggled to understand the ‘golden threads’ she sees that shows the potential consequence of her actions before using her magic until it had happened a few times. I was also a bit confused by the very end of the book – it very much felt as though it was the end of a chapter rather than the end of a novel; it wasn’t exactly a cliffhanger but seemed to end abruptly in the middle of a character speaking? I did read the ARC so this has perhaps been changed in the final copy, and definitely didn’t ruin the book for me, although it did feel as though it threw me out of the atmosphere just a bit!

Overall I loved this book and I can’t wait to see what Lou and Reid get up to in the sequel.