Months after booking my ticket, and after a few weeks of planning and speculating, Thursday the 23rd November rolled around – the day of Sarah J. Maas’s event in Manchester. To make it even more special, it had recently been announced that Charlie Bowater, the artist behind the Tower of Dawn map (and some of my all time favourite ACOTAR series fan art) would be joining Sarah for the event.

As usual, I was heading to this event with my favourite Manchester based book bloggers, Amy, Lauren and Beth. The four of us decided to meet fairly early, anticipating crowds and long queues, and luckily we were the second group of people to arrive, so were right near the front of the queue! 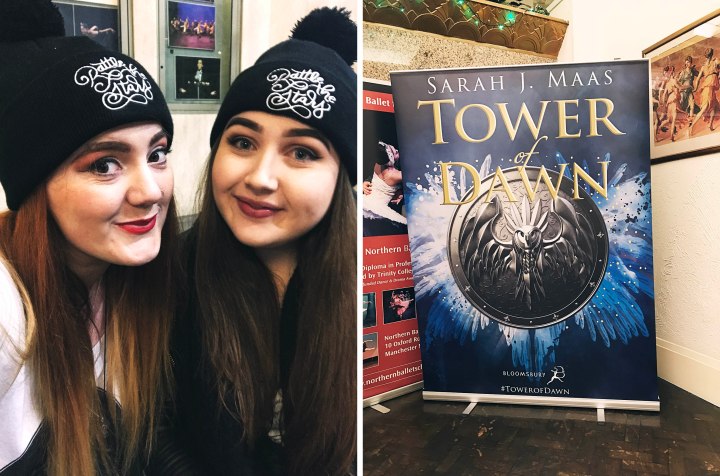 The couple of hours we spent waiting (frequently being interrupted by a few extreme fangirls) were soon forgotten when the few people in front of us noticed that, at last, the doors were being opened! Not only had we seen Sarah through the doors earlier, but Charlie had also briefly stopped by before going into the venue herself, so we were very excited to get inside at this point. One thing I was dreading was the (now very long) queue behind us trying to rush in when the doors were opened, but to my relief, they were only letting in six people at a time, giving us a good chance to get in, show our ticket and pick up our special edition of Tower of Dawn, and find a seat upstairs. This was definitely a good move on the organisers part. 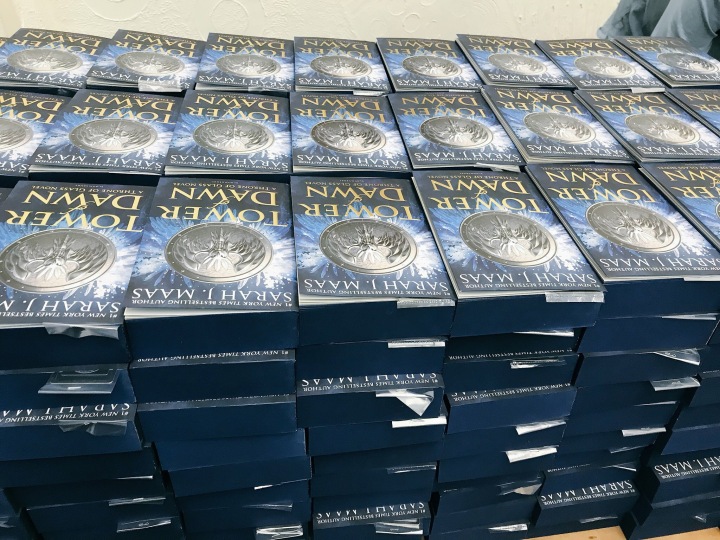 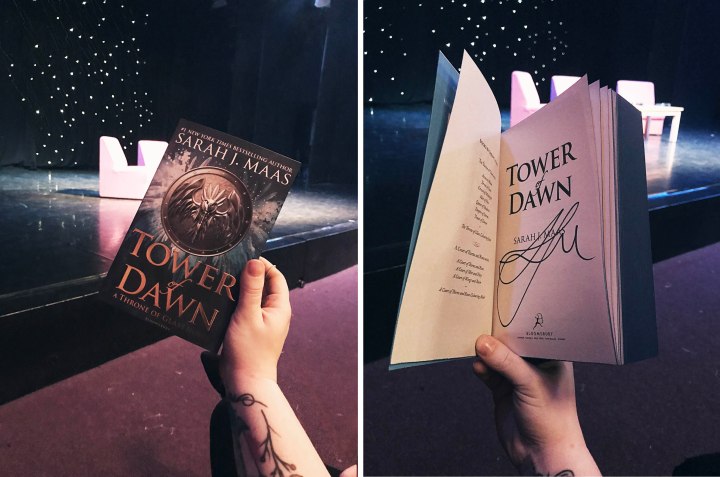 Since we were so near the front of the queue (and part of the second group to be let in) we managed to bag front row seats, and once everyone had filed in the talk began.

As I said earlier, we were lucky enough to have Charlie Bowater on the stage with Sarah at the Manchester event, and the chemistry between the two of them really made the night – it was so nice to see how much they both admired each others work and you could see just how well the two of them worked together. I’m sure they’ll continue collaborating on projects in the future and I can’t wait to see what comes of that! To be honest, I would say that the event only really needed Sarah and Charlie on the stage – there was a natural back and forth between them that made the event seem more relaxed and allowed conversation to flow better. Another part of the talk that I found really interesting was when Sarah told her Grandmother’s story – how she fled across Europe as a child after being born into a Jewish family in the 1930’s, managed to catch one of the very last boats transporting Jewish children out of Europe to the USA during the war (but not until she had demanded that her little brother be found so that he could travel with her) and was finally reunited with her Father, who had been taken away by the Gestapo and survived years in concentration camps, once the war was over. It was easy to see where Sarah gets the inspiration for some of her characters from (especially Yrene and Nesryn in Tower of Dawn) and Sarah captivated the whole room with her family’s inspiring story. I’ve been to a few author events now, and I definitely noticed that Sarah knew how to command the attention of the room – she barely needed the couple of prompts and questions given to her to keep the conversation flowing, and I could have listened to her talk for hours (and that’s coming from someone who struggles to sit still and listen to someone speak for a long period of time)!

I will say, the one downfall of the night was not being one of the 50 chosen for the meet and greet with Sarah and Charlie at the end – I completely understand that Sarah had to catch a train after the event and was therefore limited (seeing as there were around 450 people or more at the event) but I would like to see an improvement in terms of planning at future events – for example, starting the event even an hour earlier, or having more UK dates on the tour (there were only three, and two were in locations around half an hour from each other) would certainly have helped. Of course, I understand that Sarah possibly didn’t have the time to add more dates to this UK tour, but hopefully next time she will be able to and the meet and greets will be more accessible to a larger number of people!

Overall, I did really enjoy this event (and the company!), it was just unfortunate that it had to end on a low of not being able to take part in the meet and greet and then being rushed out of the venue quite fast.

Did anyone else attend any of Sarah’s tour events? What did you think of them?

One thought on “Tower of Dawn Event with Sarah J. Maas and Charlie Bowater”