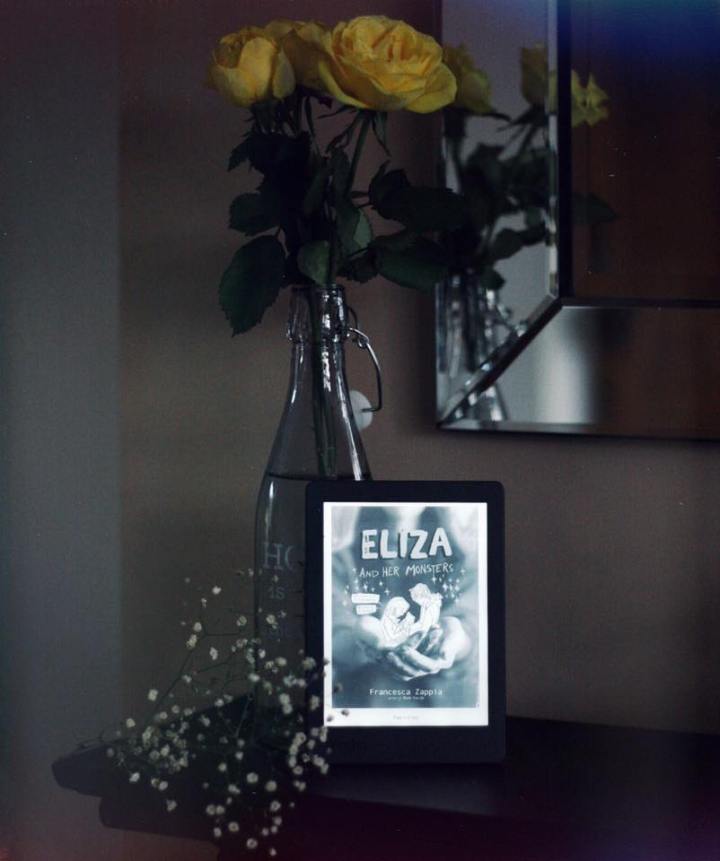 Her story is a phenomenon. Her life is a disaster.
In the real world, Eliza Mirk is shy, weird, and friendless. Online, she’s LadyConstellation, the anonymous creator of the wildly popular webcomic Monstrous Sea. Eliza can’t imagine enjoying the real world as much as she loves the online one, and she has no desire to try.
Then Wallace Warland, Monstrous Sea’s biggest fanfiction writer, transfers to her school. Wallace thinks Eliza is just another fan, and as he draws her out of her shell, she begins to wonder if a life offline might be worthwhile.
But when Eliza’s secret is accidentally shared with the world, everything she’s built—her story, her relationship with Wallace, and even her sanity—begins to fall apart.

Do you know that feeling when you finish a book and all you want to do is track down the author and give them a huge hug? That’s what I felt upon finishing Eliza and Her Monsters.
I’m not going to sit here and say that it’s diverse because it isn’t. I’m not going to sit here and say it’s something I’ve never read before because certain aspects reminded me of Radio Silence which is another book I loved but both of those things didn’t stop me from enjoying it and feeling a deep connection with the main character, Eliza. Eliza is the anonymous creator of an online webcomic called Monstrous Sea and the comic and its fandom are huge. However, Eliza is just a teenage girl struggling through high school and dealing with home life. It isn’t stated until later on in the book but it is clear from the beginning that she suffers with an anxiety disorder. I know this purely because I do too and I noticed the symptoms. Between that and the fact thats she only feels at home when she’s online, talking to her online friends and being a part of forums, I saw a lot of myself in her. Her parents struggle to understand her ‘obsession’ with her phone and computer, Eliza feels that her two younger brothers are like strangers to her and her only friends are Emmy and Max, two Monstrous Sea fans she met online.
Essentially, this is a contemporary with romance added in. Yes, we have the trope of her falling in love with the new guy at school but it is so much more. Wallace, despite being built like a football player, is extremely shy and struggles with talking aloud so many of their first meetings take place purely with them talking via notes. He is a huge fan of Monstrous Sea and writes fan fiction – more specifically, he’s in the process of typing a transcript for it. Despite falling in love with him over time (and yes, it’s a slow burn), Eliza feels that she can’t tell him that she created his beloved series.
For reasons that I won’t spoil, Eliza goes through a spell of deep depression, resulting in contemplating suicide so TW for that. I think this was written very realistically and as a person who suffers with both anxiety and depression, seeing the two come together for Eliza was very real. Her and Wallace don’t magically cure each other – they both end up seeing therapists and working through their problems. Eliza grows a lot as a person throughout this novel, making it seem a lot longer than it was.
The book also includes Eliza’s artwork from her comic and what I assume is Wallace’s transcript so we can delve into the world of Monstrous Sea. Now I’m hoping it is actually released as a graphic novel (hint hint nudge nudge.) Overall, I would 100% recommend this book. Despite feeling like a light-hearted read, it deals with serious topics such as mental health, loss and the struggles teenagers can face daily. It deals with fandom life, the world of the internet and the age old argument of what defines ‘real’ friends.

Have you read this book?
Lots of love from Angharad @

4 thoughts on “Eliza and Her Monsters by Francesca Zappia”