Angharad’s thoughts:
I will admit that I had high hopes going into this novel despite never have read a book by Marissa Meyer before. I’m a huge fan of the Alice in Wonderland/Through the Looking Glass tale and to read not only a retelling, but a retelling of the series biggest villain sounded amazing. However, it fell short for me and I only ended up giving it three and a half stars. Here are my likes and dislikes –
Likes:
+ The character of Lady Catherine. It was so interesting reading an author’s interpretation of the Queen of Hearts before she became a ruthless villain. Meyer writes her as a sweet young girl, the daughter of a Marquess and aspiring baker. She is destined to marry the King of Hearts and become a respectable Queen (delving into the idea of female repression in this world) but all she wants is to open a bakery with her maid/friend, Mary Ann. You feel Cath’s desperation at trying to break free of the role forced upon her but it becomes a whole lot more complicated when she falls in love with the new Court Jester, otherwise known as Jest. I haven’t read any of Meyer’s other books but meeting Catherine has made me want to look into her other series. She is a dynamic character and develops massively along the course of the story.
+ I loved Marissa’s writing, especially her descriptive text when it came to Cath’s baking. My mouth has never watered this much reading a book! She set the scene wonderfully, allowing us to feel Cath’s love for baking and how much passion she had for it. It makes you all the more desperate to see her succeed even though you know she doesn’t because, you know, the Queen of Hearts probably doesn’t frequent her kitchen. Too busy cutting off heads.
+ The romance. Okay, it was cliche but it’s a fairytale retelling, it’s going to be cheesy but it developed wonderfully. Catherine and Jest had fun together and protected each other. Even when Cath was courting the King, Jest had to learn to accept it, even going as far as helping the King write his love letters. Their moments were very cute together, especially one of their first moments in the garden after they meet for the first time.
+ Raven. Okay, so Jest has a Raven on his shoulder where others would have a parrot but this Raven is based off of Edgar Allan Poe so he speaks primarily in rhyme. I love him. I loved the moment where a lot of panic was happening and Raven pronounced something that didn’t rhyme because he was panicking too. Probably one of my favourite characters in the entire story. Yes, a bird. Especially at the end! I also really enjoyed the character of Hatta. He was a very complex character and he had an interesting story to tell as we meet him at the first stages of his ‘madness.’ And yes, there is a tea party.
+ I did like the ending but when I say the ending, I mean around the last ten pages. They were amazing! I won’t go into what happens but I just wish we could have had a little bit more because Catherine truly became the Queen of Hearts and everyone bows the hell down.
Dislikes:
+ NOT ENOUGH FEMALE CHARACTERS OR DIVERSITY! Other than Cath, there were precious few female characters and if there were, they were poorly developed. The strong friendship between Cath and Mary Ann sours very quickly, Cath’s mother brings nothing to the table other than wanting her daughter to become Queen and another female at court only exists for Cath to dislike and for some Duke to fancy (and at this stage I can’t even remember her name.) It’s such a shame there wasn’t more, especially as Cath herself is a brilliant character. As for diversity, there was none that I was aware of so I can’t even go into that. It’s a retelling! You’re allowed to put your spin on things so spin us some diversity!!
+ I didn’t like the first half of the book. For me, it dragged incredibly. I’m all for books setting the scene and introducing us into its world but not for majority of the book and because of this, the second half had a lot of action, and although I loved the events of it, the ending felt a bit rushed. I mean, the entire first chapter of the book is dedicated to Cath baking some tarts and although I was hungry, I was bored.

Becky’s thoughts:
I had quite a lot of thoughts about Heartless but no real ideas as to how I was going to put them into words. So, here’s a little list to make things easier for everyone:
Likes:
+ the character of Catherine.
I loved Cath! She was so authentic, determined and a breath of fresh air when it comes to YA protagonists. Cath is the daughter of a Marquess and therefore expected to be a Lady and be happy about the King taking a liking towards her, but all she wants to do is open a bakery with her best friend. The land of Hearts is incredibly sexist, and it seems that even if she weren’t a Lady, no one would approve of a woman opening a business, but Cath perseveres and doesn’t give up on her dream. This brings me onto my second point…
+ the cake descriptions.
When Cath is first introduced, she’s baking lemon tarts, and I’ve craved the things ever since. All of the descriptions of food are just so perfect, and frankly I’m going to go hunting for some cake right now just thinking about them.
+ the ending.
The last 70 or so pages were amazing! They took a really dark, exciting turn, and although they were tragic, I really enjoyed them. I won’t say anything more though as I don’t want to spoil anything!
+ the world building.
The book is set in Hearts, with the land of Chess, where the White Queen rules, being on the other side of the Looking-Glass. It’s completely Wonderland, but not the Wonderland that you already know.
Dislikes:
+ the middle-ish section of the book.
I found the middle of the book to drag quite a bit and be quite boring. There was character development during this time, but I would’ve liked a bit more action within the plot as well.
+ most of the secondary characters.
I really liked Jest, Raven, and the Sisters, but apart from that, I couldn’t click with any of the other secondary characters. Cath’s family were awful to her, so were naturally meant to be disliked, but I didn’t think her friend Mary Ann was very well rounded either, and most of the rest of her acquaintances are dull or aren’t explained very well. 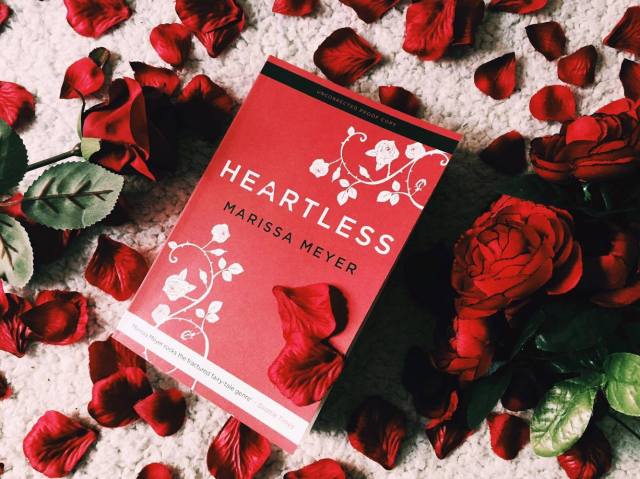 (We’d like to thank Macmillan UK for sending us a proof copy of this book in exchange for an honest review.)
Love,