“I know your soul. Everything else is just an ornament.” 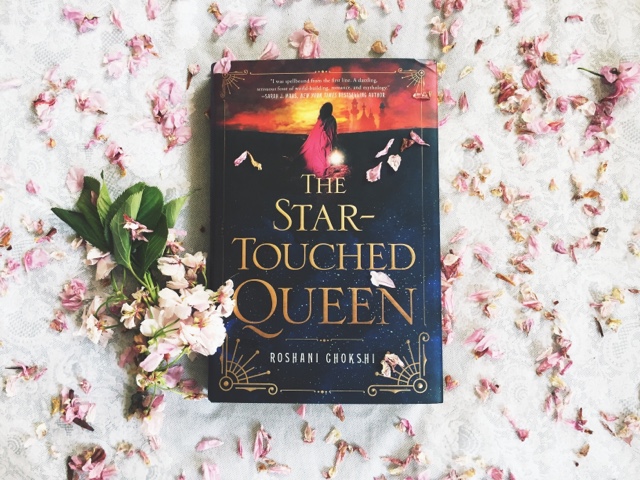 Maya is cursed. With a horoscope that promises a marriage of death and destruction, she has earned only the scorn and fear of her father’s kingdom. Content to follow more scholarly pursuits, her whole world is torn apart when her father, the Raja, arranges a wedding of political convenience to quell outside rebellions. Soon Maya becomes the queen of Akaran and wife of Amar.
But Akaran has its own secrets—thousands of locked doors, gardens of glass, and a tree that bears memories instead of fruit. Soon, Maya suspects her life is in danger. Yet, who can she trust?

The Star-Touched Queen wasn’t in any way what I expected it to be. It reminded me, in many ways, of an amalgamation of some books that I love; there were touches of The Wrath and the Dawn in there, and it seemed very similar in some ways to both Daughter of Smoke and Bone and Deathless – these two are very much on my list of favourite books. I also saw bits of A Court of Thorns and Roses and Fallen throughout. However, as a whole, it just didn’t quite click. Don’t get me wrong – I enjoyed it. Three and a half stars still means that I finished it and liked it a fair bit! I just found that it was one of those books that had sections which I really liked, and other sections that I just wasn’t keen on.
For example, I enjoyed the relationship between Maya and her sister Gauri. I thought that the majority of Maya’s character development was seen in their interactions, or even just her thoughts and memories of her once she left the harem. The more mystical aspects of the book were perfect, and I wasn’t anticipating the plot twists at the end of the first half of the book.
The writing style was absolutely beautiful, and the descriptions were magical, but some could have gone into a bit more detail, especially when setting the scene.
I’ve seen a few people comment on the instalove in this book, and honestly I just didn’t see it as the biggest issue here. Maya quite clearly does not trust Amar, even after she is given a reason to trust him more – and to be honest, the revelation at the end of part one is a pretty good reason. It’s also one I have seen happen in other books, and in some cases, it worked incredibly well.
Now, to the parts that made me knock down the rating a bit. I understand that, since this was inspired by Indian mythology and culture, the lack of gender equality was probably necessary, but I just didn’t like when Maya’s father commented that she would have been a great leader if she’d been born a boy, and she didn’t say anything. She didn’t even have any indignant thoughts towards him or his statement. Also, I can’t excuse Maya’s comment of “I’d rather spread ideas than legs” to one of the women in her Father’s harem. Yes, there was obviously animosity between the two of them that had already been shown earlier in the book, but I just think the slut shaming was very unnecessary.
As I mentioned before, the world building could have been, well, more built upon. I’m a very visual person so I struggle with books when they try to set the scene but don’t quite go far enough, and you can’t picture what the author is trying to describe. Some of the places in The Star-Touched Queen sounded like they’d be amazing, had they been described more thoroughly. I would also have liked to have found out more about Nritti – she seemed like a really interesting character but just wasn’t developed as much as she could have been, in my opinion!
I do think that, had a few parts been taken out of this book, and had it been a bit longer so that the descriptions could be more thorough, it could have had the potential to be five stars. I’m definitely excited to read what Roshani Chokshi writes next, as I have no doubt that it’ll be beautiful.